Wheatgrass Is the Most Nutritious 'Superfood' of Them All!

Wheatgrass is becoming more and more popular as a key ingredient in home-made juices and smoothies. It is so rich in nutrients - vitamins, minerals, amino acids, enzymes and many other phytonutrients. You should seriously consider adding a little wheatgrass to all of your juice and smoothie recipes.

Studies show that wheat grass has a multitude of health benefits. In addition to providing most of our daily recommended requirement of vitamins and minerals, wheat-grass is also used by many to detox the body, prevent cancer and improve digestion and blood circulation. It assists in oxygenating and alkalizing the blood, suppressing appetite, regulating the thyroid and boosting the immune system. Wheat grass contains as much as 70% chlorophyll, which is higher than most vegetable greens. Some researchers have even recommended that a diet high in chlorophyll can significantly reduce the risk of colon cancer. 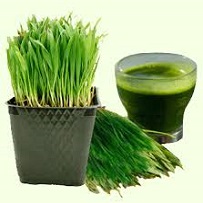 With its high content of chlorophyll, wheat grass is more like the composition of our blood than any other plant substance. As a matter of fact chlorophyll is considered the “blood” of the plant world due to its similarity to our blood in molecular framework. Once you consume wheatgrass, you can feel it almost immediately. Many say that drinking wheatgrass first thing in the morning is as energy boosting as a cup of coffee or tea.

Where To Get It

No wonder wheatgrass is found in more and more juice and smoothie recipes. You can find fresh wheatgrass sold at your local health food store and farmers market, and now in many supermarkets. You can even find already bottled, frozen, powder and pill forms of wheatgrass, but these do not have as many nutrients - especially enzymes - as freshly juiced wheatgrass

How To Grow Wheatgrass

Anyone can grow wheatgrass at home! It's as easy as growing grass - just order organic wheatgrass seed online (Amazon is my source - just click wheatgrass seed), and plant it in a pot of organic soil easily found at any garden store. Within 2 days you'll see white shoots. Within 4 days you'll see green blades of grass which you can start cutting and adding to your juice. Don't be fooled by anyone who makes it sound complicated and expensive with special trays and whatnot! No special equipment is needed.

Here's what to do. Take one of your flower pots, fill it with soil, sprinkle seed liberally on top, cover with 1/8" of soil, and water. When the grass blades get about 5-7" tall cut a thumb length and thickness and add to any of your juice recipes. That's enough to get all the amazing nutrients, but not so much that is makes your juice or smoothie bitter. This is important: when you have cut all the green part of the grass, let it grow again for a second harvest. But after that start over with fresh soils and seed, because the soil is depleted. 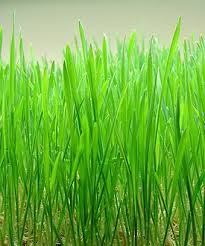 How To Add Wheatgrass to Your Juice or Smoothie

Unique juice machines known as a "slow" juicers are particularly effective for juicing wheatgrass at home. I use a slow juicer made by Hurom though an equally fine one made by Omega has a better warranty. These juicers remove the liquid from the wheatgrass in a more thorough way than the common juicer. They're not only best with wheatgrass, they are also superior when juicing other greens including lettuce, celery, spinach, watercress and herbs. For smoothies you need a high powered blender - the best and most popular is the Vitamix. Your cheap kitchen blender is not powerful enough.

How To Drink Wheatgrass

You can drink wheatgrass by itself or as an ingredient combined with other fruits, vegetables, seeds and nuts. Few people enjoy the flavor of wheatgrass by itself. But it’s easy to make it very tasty by combining carrot, cucumber or apple. Add a little honey as a sweetener. You can also add other greens like kale, parsley, dandelion, alfalfa sprouts or celery. Try adding some ginger for a delicious surprise! 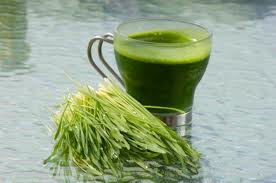 More recipes based on the latest nutritional research can be found in Juicing & Smoothie Recipes That Heal! available here in the box on the right and for Kindle, Nook and iPad at Amazon, Barnes & Noble and iBooks.

Drinking wheatgrass must be done with care. The juice from most greens is powerful on the stomach. Too much can cause nausea. Drink only about 4 ounces of wheatgrass each day, preferably in 1 ounce portions throughout the day. This is due to its powerful cleansing effects. If you have a sensitive stomach, simply reduce your intake as I do to 1 ounce a day. And never drink it on an empty stomach.